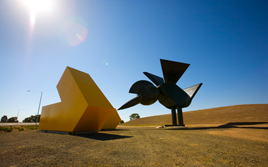 ConnectEast has invested $5M to create an outstanding sculpture park along EastLink.

Four major artworks are prominently located on the roadside, while eight smaller artworks along the EastLink Trail are waiting for you to discover.

All of the artworks are by prominent Australian artists. The major artworks were commissioned especially for EastLink from Callum Morton, Emily Floyd, James Angus and Simeon Nelson.

EastLink is Australia’s largest sculpture park, with more than 200,000 visitors every day!

Find out more about EastLink artworks in this ABC radio program – In the Field On a Freeway.

The four large-scale artworks located on EastLink’s roadside can be seen from your vehicle as you drive on the tollway.

You must not stop, or leave your vehicle while travelling on EastLink.

A further eight sculptures are adjacent to the EastLink Trail.

The painted fibreglass and steel framework contains 24 ellipsoids, which form a chain running 30 metres along the roadway.

Each ellipsoid variesin size, shape and form between 1 and 3 metres in diameter. As the viewer passes, the shapes appear to stretch from spheres into a string of ellipsoids. Painted in colours drawn from the surrounding native fl ora, the artwork forms a series of lenses to view the surrounding landscape.

Constructed of steel, concrete and glass, at 20 metres high Hotel is a large-scale model of a high-rise hotel.

Positioned out of context, with no surrounding structures, the artwork appears out of place, as if belonging to another time and place. Hotel is effectively a giant folly. Its generic form looks like a number of places simultaneously, as if its identity is unstable and still moving, but never quite of this world.

Desiring Machine lies as a fallen tree beside the roadway, putting new roots into the ground. Its silhouetted fi ligree lies like a decaying
piece of obsolete agricultural machine, a relic of the human struggle to co-exist with nature. Designed using a Victorian fl oral motif, the
branch-like stems are mechanical and perfectly symmetrical rendering them unnatural. This opposition of nature and machines describes
our desire to control nature.

In the sculpture Transfi guration, the artist Mitsuo Takeuchi exploits many of the useful and attractive qualities of steel in the piece’s
construction. Standing just over three metres high, Transfi guration is a strong, yet delicate, steel curved artwork. The artist describes
the artwork as an experiment in which he is expressing the concepts of position and visible topologies as one substance.

Mysticeti 2007 is made from galvanised steel and reaches approximately 4 metres high.

This piece continues Alexander Knox’s exploration of the built ruin. The word mysticeti refers to the class of whalebone depicted in the sculpture.

Ned captures the image of the famous outlaw Ned Kelly, made popular by Sidney Nolan over the last 60 years. Fabricated in steel, the piece stands 2.8 metres high.

The artist transforms discarded distance counters from the Victorian Railways into towers that are memorials to statistics of both distance and casualties. In a culture bombarded with numbers every day, Reverent Numbers seeks to provide a connection with these human tragedies by embedding the towers with mirrors. On closer inspection, the viewer can catch a glimpse of himself or herself, a friend or stranger, who are all a possible statistic.

Boy Looking Up conveys the innocence and simplicity of another era. Created from steel plate, the sculpture stands 3.2 metres high and is 4.5 metres long.

The three painted steel rings that work together to form Red Rings are each 2.5 metres in diameter and 16 millimetres thick. The artist visualises the piece as forming part of its environment; its strongly contrasting colour creating a focal point. The simplicity of form expresses strength and tension that is the motivating force behind Red Rings.

Worked from a single piece of Harcourt granite, First Voyage is 3.5 metres long, nearly a metre wide and just under a metre high. The artist has described working with granite materials as slow and heavy, teaching him patience.

By working with such old materials, he is able to fuse them with the present, creating beauty from nature’s offerings. 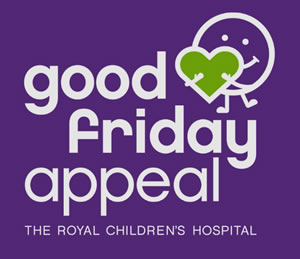