You are here: Home / News / Freeway art; yeah, whatever…

On the drive to Flinders, Lizzie took Granny and the Gang along the EastLink, past the ubiquitous offerings of freeway…er…art.

Perhaps we can live in hope that the GFC will stem the tide of all that conceptual trash now littering the sides of our semi-urban byways. Call us a philistine, but Callum Morton’s Hotel just doesn’t to it for us. The folly bit we get, no worries.

“…never quite of this world.”“Hotel is a large scale model of a high rise hotel. It will sit alongside EastLink in an open field. Hotel is effectively a giant folly. Motorists will view it from the caas an actual hotel and perhaps over time as a strangely de-scaled prop that has escaped the theme park or film set.

“Hotel continues the development of what amounts to a parallel built universe that I have been constructing alongside the real world for a number of years. In this world things appear in unlikely contexts in oddly de-scaled and altered form, as if they have been pushed down a portal from the recent past and popped out mistakenly in this time and place. Hotel appears as a piece of roadside architecture, only there are no other buildings for miles and you can’t get in. “I have for some time been interested in how we perceive things while in motion, in particular from the space of the car. The freeway belongs to a family of spaces in contemporary life known as non-places. These spaces, that also include sports stadiums, airports, cinemas, casinos among others, are transit zones, built to facilitate our movement through them rather than encourage us to occupy them for any length of time. “So Hotel acts as a type of monument or mirror to the effect produced by both the car and the space of the freeway itself. It is strangely disconnected from the landscape it is in, and its form is distilled and generic rather than specific.

It looks like a number of places simultaneously, as if its identity is unstable and still moving, but it is never quite of this world. In a sense the mirror effect it produces is simply a question about how our worlds are constructed, not an alternate vision but the same one slightly out of focus.” – Callum Morton

(Spiel lifted from the ConnectEast document on Google) 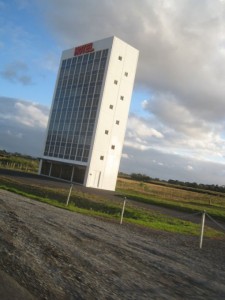