Hotel by Callum Morton is located in an open field beside the East Link Freeway, Melbourne, Australia

Hotel is a large scale model of a high rise hotel in an open field. Hotel is effectively a giant folly. Motorists will view it from the car as an actual hotel and perhaps over time as a strangely de-scaled prop that has escaped the theme park or film set.

“Hotel continues the development of what amounts to a parallel built universe that I have been constructing alongside the real world for a number of years.

In this world things appear in unlikely contexts in oddly de-scaled and altered form, as if they have been pushed down a portal from the recent past and popped out mistakenly in this time and place. Hotel appears as a piece of roadside architecture, only there are no other buildings for miles and you can’t get in. 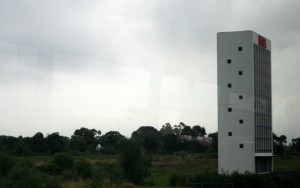