You are here: Home / News / Look, but don’t stop when it comes to artwork

A FAKE $1.2 million hotel will be one of four major public artworks lining EastLink to be unveiled today.

The 20m-high Hotel, described by its artist as a “giant folly”, will sit in an open paddock in Dandenong South.

The 12m-by-5m structure will be made of concrete, steel and glass, and be lit using solar power.

Victorian artist Callum Morton, who designed Hotel, said it was part of a “parallel built universe” that had formed the basis of his art for a number of years.

It will stand between Greens Rd and Bangholme Rd, adjacent to the northbound carriageway in Dandenong South.

“Motorists will view it from the car as an actual hotel and perhaps over time as a strangely de-scaled prop that has escaped the theme park or film set,” he said.

“In this world things appear in unlikely contexts in oddly de-scaled and altered form, as if they have been pushed down a portal from the recent past and popped out mistakenly in this time and place.

“Hotel appears as a piece of roadside architecture, only there are no other buildings for miles and you can’t get in.”

The 14 works, titled The EastLink Collection, were chosen by an art committee headed by Ms Holmes a Court, ConnectEast independent director Yvonne von Hartel, who has more than 40 years architectural experience, and Roger Wood of Melbourne-based company Wood Marsh Architecture.

It is understood the trio approached eight artists and asked them to submit ideas.

The four large-scale projects were chosen and another 10 smaller artworks were selected to line the shared-use path, known as the EastLink trail.

It is understood the public artworks investment is the biggest of its kind in Australia.

Construction of the 39km tollway, formerly known as the Mitcham-to-Frankston freeway, is well under way.

The $2.5 billion tollway is expected to open ahead of its November 2008 deadline.

Thiess John Holland is constructing EastLink on behalf of ConnectEast. 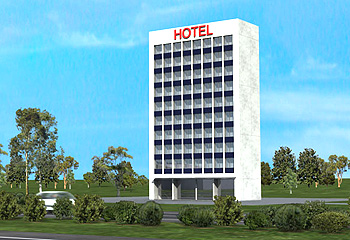 News | Look, but don’t stop when it comes to artwork